For US residents only

What are some important things to know about the safety of LUTATHERA?

LUTATHERA® (lutetium Lu 177 dotatate) injection for intravenous use is associated with some serious safety considerations,...

LUTATHERA® (lutetium Lu 177 dotatate) is a prescription medicine used to treat adults with a type of cancer known as gastroenteropancreatic neuroendocrine tumors (GEP-NETs) that a...

See More
Back To Site

LUTATHERA Is Believed to Work Differently From Most Other Cancer Treatments

LUTATHERA is believed to work differently from other cancer medicines, with a 2-part approach that specifically targets and enters the cells that have somatostatin receptors, releasing energy in the form of radiation that damages them and nearby cells.

In other words, LUTATHERA is a “key” that connects with the “lock” (cells containing somatostatin receptors). 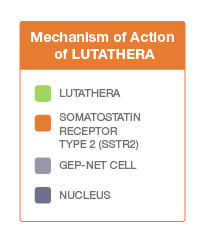 Next: How LUTATHERA May Help

You are now leaving the Novartis site and moving to an external website independently operated and not managed by Novartis Pharmaceuticals Corporation. Novartis assumes no responsibility for the site. If you do not wish to leave this site, click Cancel. Or click OK to continue.